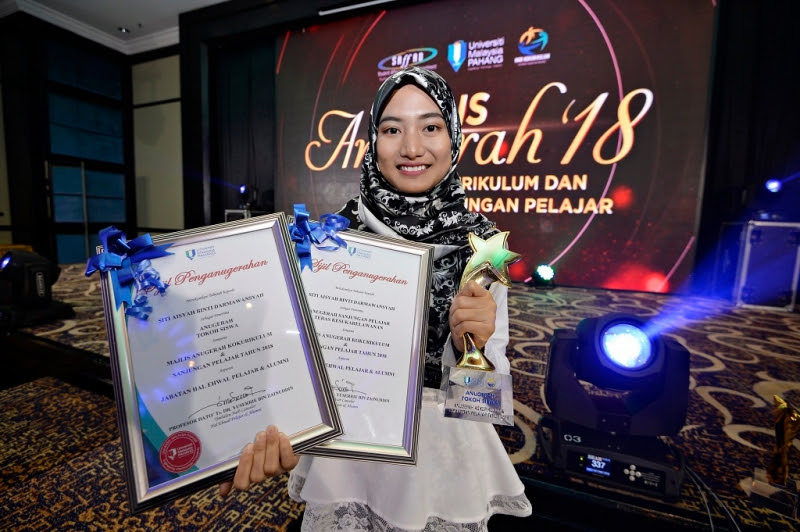 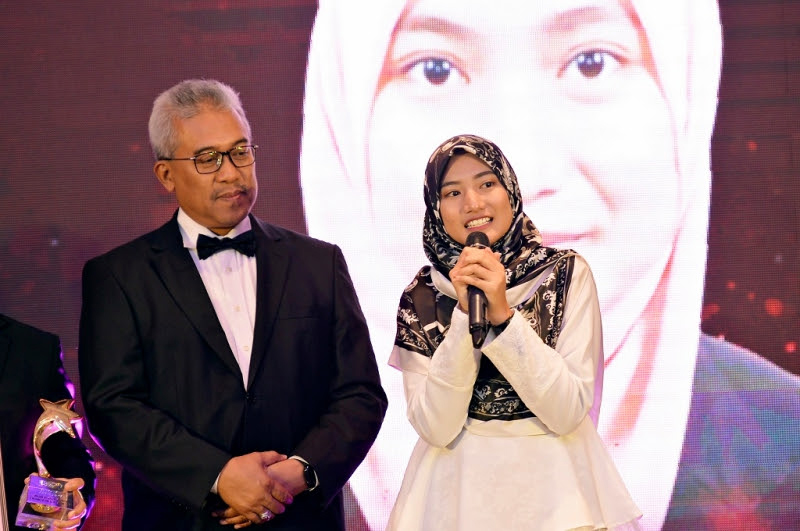 Universiti Malaysia Pahang (UMP) undergraduate, Siti Aisyah Darmawansyah, 23, was recently crowned ‘UMP Student Role Model’, for her unwavering interest and leadership role in many of the volunteer activities organized by the university.

Held at the Vistana Kuantan City Centre on February 28, 2019, the award presentation was part of the 2018 Co-curricular Award & Students Appreciation ceremony, conducted annually by the Department of Student Affairs & Alumni. At the ceremony, Siti Aisyah also coveted the Student Appreciation Award for volunteerism, bringing home a trophy, certificate, cash prize and a holiday package.

The awards were presented by the Deputy Vice-Chancellor (Student Affairs & Alumni), Professor Dato’ Dr, Yusserie Zainudin, in the presence of the Director of Sports & Culture Centre, Abd Rahman Haji Safie.

According to the Professor Dato’ Dr. Yusserie, what all of the award recipients share in common were outstanding performance and unwavering commitment in their co-curricular participation throughout last year.

“This award recognition is hoped to inspire and encourage other students to continue to participate in various activities held at the university,” he said.

“Students’ participation in such activities will be duly recorded in the Student Development System as well as in the Extra Co-Curricular System (x-CGPA), and will be translated into a second transcript known as the Co-curricular Transcript,” he added, stressing that he believed the additional transcript will prove worthy to help the students land a good job.

As repeatedly emphasized by the Minister of Education, Dr. Maszlee Malik, Professor Dato’ Dr. Yusserie said the university is also focusing on the three elements – namely happiness, love and mutual respect – to be embedded in many of its activities and acculturated as part of campus life.

Meanwhile, Siti Aisyah said she did not expect to win the award as the nominees for her category were lined up with outstanding students. Notwithstanding, she felt blessed and would share the prizes with her parents.

“Winning the award has truly uplifted my spirit, and I am further encouraged to continue with my volunteer work to help out the needy,” said the daughter of couple Darmawansyah Abdullah and Sri Umiaty Saubari.

As a concerned student, Siti Aisyah said she has always taken the opportunity to participate in community and social service programmes conducted by the university, among which were the Global Student Outreach at Satun, Thailand, and the volunteer service work with the homeless in Kuala Lumpur.

And despite a hectic study time-table at the Faculty of Industrial Management (FIM), it certainly did not become an obstacle for her to shoulder the responsibilities of an Executive Committee member (Exco) for Volunteers within the Students Council for the 2017/2018 session.

In fact, she took on several more leading roles – being directors of the ExpoConvo 2018, a Leadership Course, and the Aceh Global Exploration and International Community Service Programme in Indonesia. Other activities to her credit were Go Green SASET and mural painting at the Sultanah Hajah Kalsom Children Home.